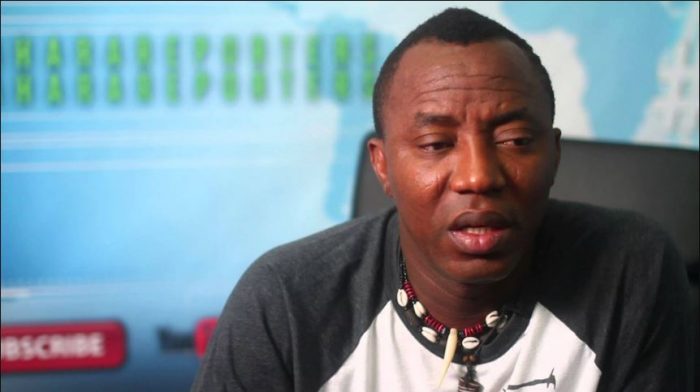 The Department of State Services (DSS) has said its investigation so far revealed that ‘Revolution Now’ was smokescreen for the actual intention of Omoyele Sowore, the candidate of the African Action Congress (AAC) in the last presidential election, to overthrow President Buhari.

The security agency also alleged that Sowore intended to free Ibraheem El-Zakzaky, the detained leader of the Islamic Movement in Nigeria (IMN) having received millions of Dollars from foreign sponsors.

The DSS also said it engaged in a painstaking investigation of Sowore’s activities in view of the quantum of evidence so far gathered and may return to court to seek an extension of the 45 days granted it by the Federal High Court, Abuja to detain him.

The DSS made this known in a fresh document it filed at the Federal High Court on Monday in response to an application by Sowore, challenging the court’s order, granting the security agency 45 days to detain him pending investigation.

In the counter-affidavit deposed to by Godwin Agbadua, an official of the DSS, it was stated that Sowore was arrested on reasonable suspicion of having committed a capital offence, upon his alleged involvement in terrorists’ activities.

“The respondent/applicant (Sowore) planned to violently change the government through the hashtag RevolutionNow. The respondent/applicant hid under the cover of call for mass protest with the hashtag RevolutionNow to mislead unsuspecting and innocent members of the public into joining him to topple the government of the Federal Republic of Nigeria

“In his plot to topple the government the respondent/applicant held series of meetings with members at a prescribed terrorists‘organisation, Indigenous Peoples of Biafra (IPOB) with a view to mobilizing strong forces to realize his agenda at changing the government

“The respondent formed an alliance with a fugitive, Nnamdi Kanu, a self-acclaimed leader of the proscribed terrorists group, Indigenous People of Biafra (IPOB), to launch series of attacks on Nigeria with a view to violently removing the President of the Federal Republic of Nigeria

“After series of closed-door meetings between the duo in the United States of America, they addressed a press conference wherein they both stated their resolve to form alliance against the Nigerian government, the duo stated that they have a well-planned out strategy to realize their objective, which is toppling the government.

“There is the need for the applicant/respondent to investigate such reasonable suspicion of the relationship between the respondent/applicant and IPOB.

“The respondent held series of meetings with some foreign collaborators outside Nigeria including Dubai where millions of dollars were given to him to sponsor a widespread attack on Nigeria with a view to violently removing the President of the Federal Republic of Nigeria and freeing Ibrahim Yaqub Elzakzaky (Shaikh).

“In furtherance to the plans to violently free Elzakzaky from lawful custody. The respondent held several meetings with a proscribed terrorist’s organisation. Islamic Movement in Nigeria (IMN) where they strategized on how to carry out attacks to force the government to free Elzakzaky.

“The suspicions require diligent investigation by the applicant/respondent. The planned action constitutes a threat of violence to intimidate or cause panic in members of the public as a means of affecting political conduct

“The investigation is still ongoing. Upon the completion of investigation, the case file will be forwarded to the office of the Attorney General of the Federation for advice and possible prosecution,” DSS said.